The systematic study of past human life and culture by the recovery and examination of remaining material evidence, such as graves, buildings, tools, and pottery.

Back on the Map

Regeneration programme aimed at the East End and Hendon areas of Sunderland, Tyne and Wear.

A period of human culture between the Stone Age and the Iron Age, characterized by the use of weapons and implements made of bronze.

The protection, preservation, management, or restoration of wildlife and of natural resources such as forests, soil, and water.

A steep sided wooded valley through which a stream runs.

Covering managing the Durham Heritage Coast, including vision and objectives.

The scientific study of the origin, history, and structure of the earth.

A ravine – valley or gorge in the earth’s surface worn away by running water.

Property that is or can be inherited; an inheritance. Something that is passed down from preceding generations; a tradition.

Stretches of undeveloped coastline defined by the Countryside Agency as being of outstanding scenic value where resolution of conflicts is needed between recreation, conservation, public access and agriculture.

The management group of the above area.

A multisectoral approach with involvement of stakeholders to managing the coastal zone.

The zone bteween the high and low water marks.

The period in cultural development succeeding the Bronze Age in Asia, Europe, and Africa, characterized by the introduction of iron metallurgy. In Europe it began around the eighth century B.C.

A furnace used to reduce naturally occurring forms of calcium carbonate to lime.

Describes the structure of the cliff top areas on the Durham Coast.

Of or relating to the sea

Of or relating to the cultural period of the Stone Age between the Paleolithic and Neolithic periods, marked by the appearance of microlithic tools and weapons and by changes in the nature of settlements.

Of or relating to the cultural period of the Stone Age beginning around 10,000 B.C. in the Middle East and later elsewhere, characterized by the development of agriculture and the making of polished stone implements.

A low-roofed concrete emplacement for a machine gun or anti-tank gun.

The term ridge and furrow is often used by archaeologists and others to describe the pattern of peaks and troughs created in a field and caused by the system of ploughing used during the Middle Ages in Britain.

SSSI’s are designated areas and not necessarily owned by a conservation organisation or by the Government, they can be owned by anybody. The designation is primarily to identify those areas worthy of preservation. An SSSI is given certain protection against damaging operations, there is a list of what can and cannot be done on SSSI. The status also affords a certain amount of planning protection, but in practice this is sometimes not sufficient to prevent development.

Living or growing on land, not aquatic.

A £10m programme of environmental improvements to regenerate the coast of Durham between 1996 – 2002.

The Partnership of organisations that undertook the major regeneration of the Durham Coast between 1996-2002. 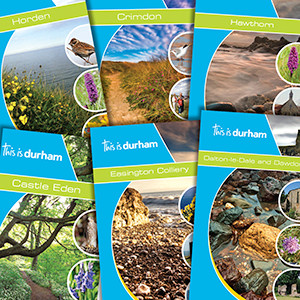