Home / Our coast / Caring for our coast / Beach cleans

Stop Press- We’ve made the news!

Hundreds of volunteers have collected a record five tonnes of rubbish from Durham’s Heritage Coast this year.

Schools, universities, businesses, community groups and members of the public have taken part in 90 beach cleans, more than ever before, to help keep the coastline beautiful and safe.

Almost 2,000 bags of rubbish, mainly plastic bottles, cans and discarded or lost fishing nets (also known as ghost nets), were removed from the stretch between Seaham and Crimdon, along with car tyres and 18 shopping trollies.

It is a labour of love for Heritage Coast Officer, Louise Harrington, and she has been heartened by the response from so many volunteers.

Louise says: “It’s fantastic to see the enthusiasm to deal with this problem from all sorts of people, young or old, local to the area or not.

“Some of the rubbish has been left by visitors but the majority of it has been washed down from the rivers and it’s a challenge to keep on top of it. 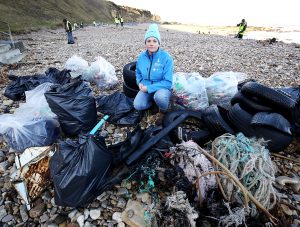 “I’m very proud of all the volunteers who have given up a total of 1,650 days to help out. And I know there are a lot of members of the public who litter pick whenever they visit the coast, too.

“We’re very grateful to everyone helping to keep our coastline beautiful and safe for visitors and wildlife.”

The most recent beach clean at Seaham involved members of the public and 27 Durham University students.

Organised by Adam Carruthers, environment chair for Durham University Student Volunteering and Outreach, the students came from a number of different university faculties and from as far afield as China. 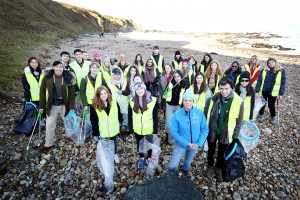 Adam is studying Maths and in his second year at Durham University. Originally from Acton in London, he says: “Helping out in Seaham was a really enjoyable way to spend the morning.

“We all just about squeezed into the bus to head to the beach and, although it was chilly it was a very bright and clear day.

“We were able to clean up a lot of trash, including a surprising number of car tyres. And we had the satisfaction of walking away from a clean beach to get fish and chips before heading back to Durham city.”

The final official Durham Heritage Coast beach clean of 2019 is on 15th December at Red Acre beach, Seaham (next to the Marina) from 11am – 1pm. Mulled wine and minced pies will be on offer and Santa hats are festive attire are encouraged.

The Heritage Coast of Sunderland, Durham and Hartlepool is a wonderful mosaic of great natural, historical and geological interest, with dramatic views along the coastline and out across the North Sea, an area rich in shallow bays and headlands with yellow Magnesian Limestone cliffs.

It encompasses some of the most dramatic coastline in the North, with a rich shoreline worthy of the highest status nature conservation designations, notably home each May to a breeding colony of Little Terns, one of Britain’s rarest sea birds.

The Heritage Coast team carry out beach cleans and surveys for the Marine Conservation Society all along the Durham Coast from Seaham to Crimdon.  Marine litter and the impact it has on our oceans is in the news almost every day.  A lot of the litter is from unknown sources and washed up on the beach.  Red Acre beach in Seaham often has masses of plastic bottles, cans and fishing material which is collected on a regular basis by volunteers, community groups, businesses and schools.

Volunteers have collected almost 600 bags of rubbish from the Durham coast this year!

Beach litter is more than just an eyesore, it is potentially harmful to humans and wildlife, and it is costing local authorities in the UK an estimated £14.5 million annually.

Please contact us if you are a community or corporate group who would like to get involved with litter picks – we can help and support you with this by helping provide equipment etc.

Our next scheduled beach cleans : unfortunately we have had to cancel our forthcoming beach cleans scheduled for Sat 28th and Sun 29th March which were part of the Great British Beach Clean. We will post details of future beach cleans in due course. Apologies for any inconvenience caused.

We also advertise local beach cleans on our Facebook page.