Lime was found to improve the crops grown. Limekilns were built either near the fields that were using it or on a more commercial level. The limestone was burnt and spread on the fields.

At Seaham Harbour several large kilns were used, possibly to export lime or to help in the building of the harbour walls.

Many more once existed throughout the management area. Place names such as Limekiln Gill appear at both Horden and Crimdon. The lime produced was used for agricultural improvement as well as for the production of mortar. Lime production grew with industrialisation and provided material for the large iron and chemical works at Dawdon. Hawthorn quarry expanded in the 19th and 20th centuries. Smaller scale industry appears at Hawthorn Mill. These early industrial heritage sites are a substantial educational resource for the Heritage Coast.

Coal had by far the biggest impact on the whole area. Its rise and subsequent domination of Durham’s coastline began in the 1830’s. The earliest collieries; Murton, Easington and Seaham opened in the 19th century and pioneered techniques to deal with the depth of coal seams. Vane Tempest, Dawdon, Horden and Blackhall collieries were opened in the 20th century. The mines used considerable areas of land, with their spoil heaps spilling on to the beaches. Settlements grew rapidly alongside the collieries, and these villages now provide the backdrop to today’s coast. The rapid closure of the collieries in the early 1990’s had a dramatic and adverse impact on the socio-economic status of the area. The landscape also changed ‘overnight’ with the removal of the colliery buildings.

Seaham town and harbour was built specifically for the coal industry and the subsequent rise in maritime traffic in the post medieval and modern period is reflected in the large number of shipwrecks off the coast. 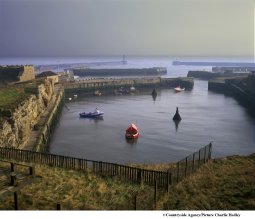