The Durham Coast has been populated throughout prehistoric and Roman periods and was a centre of activity during the Mesolithic (8000 – 4000 B.C.) and Neolithic (4000 – 2000 B.C.) periods. There have been recent finds of flint tools and weapons in the area which are important for understanding human activity in the North East and the Durham Coast is the only location within County Durham to yield a large collection of flints. Significant Mesolithic finds include a hearth identified at Crimdon Dene, such finds indicate substantial exploitation activity at this time and are concentrated near sheltered denes.

Although there is little evidence of Bronze Age (2000 B.C. -750 A.D.) activity within the Heritage Coast, there is speculation that Bronze Age burial sites may exist.

There has been no evidence of the Iron Age (750 B.C. – 75 A.D.) uncovered in the area. How much this is due to lack of archaeological study or historic use patterns is unclear. Many sites of Iron Age date are known from the region, including sites located on the coast, indicating the likely occurrence of similar sites locally.

Evidence of Roman presence (75 – 400 A.D.) is not well established. There have been a number of finds around Seaham, although there has been no excavation. It has been suggested that Seaham Headland or Beacon Hill to the south may be the site of a Roman signal station. Given the large amount of Roman activity elsewhere in the region it is likely that evidence of settlement may be recovered. County Durham is well known for its Roman forts and settlements, but military and civilian sites at the coast and its hinterland have yet to be found. There are suggestions that the coast may have been used as an outpost system serving Hadrian’s Wall. At Blackhills Gill, Horden, a cluster of Roman finds is recorded suggesting a station or other kind of settlement. Roman pottery has been found to the north of Ryhope Dene.

There are few remnants of the pagan English period, except for some notable early sites such as the pagan cemetery at Easington from around 6-8th century. 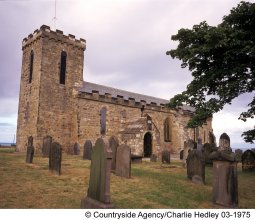 There have been recent excavations at Seaham Headland uncovering timber and burials indicative of monastic origins. Locally, the churches at Easington St Mary’s, Seaham St Mary’s and Castle Eden St James, and their associated settlements show evidence of early medieval activity. Castle Eden is mentioned in 10th century texts as having secular settlement. Many local place names such as Yoden and Easington have a strong Old English origin.

Fragments of the late medieval landscape survive in the form of ridge and furrow (known locally as rigg and furrow) earthworks such as at Beacon Hill, a result of the ploughing practice used at the time. The most notable exists at Station Cottages in Horden. Modern industrial and agricultural development has removed a great deal of these landscape features.